Good ideas, ground-breaking innovations and entrepreneurial responsibility: that sums up the history of B. Braun. 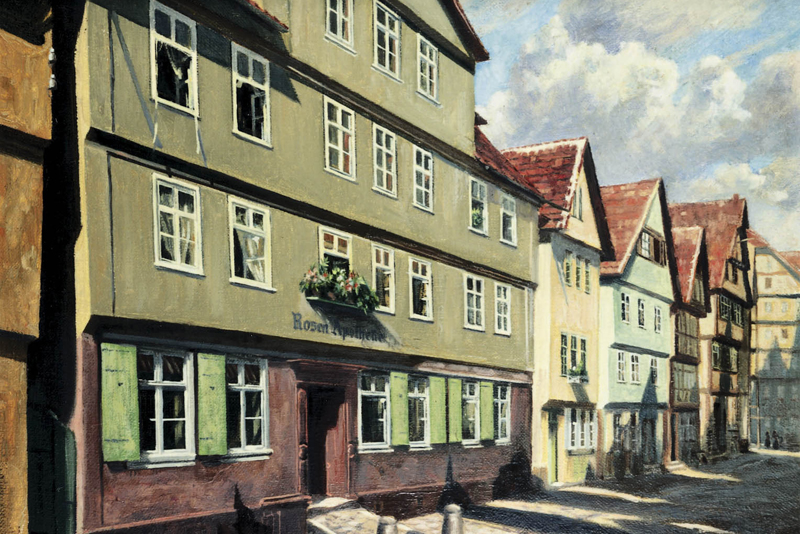 It all began in 1839, when Julius Wilhelm Braun bought the Rose Pharmacy in Melsungen. The challenges have changed since the early 19th century. But then, and now, our goals are: create innovations in medical therapies and recognize what is important during exchanges with customers and partners. In six generations, the enterprise has developed into a global company with subsidiaries on every continent.

14,000 thalers of start-up capital, plus courage and boundless enthusiasm

What plans did 31-year-old Julius Wilhelm Braun have in his head when in 1839 he bought a pharmacy in Melsungen?  He paid 14,000 thalers, quite a tidy sum in those days. The young entrepreneur had courage and a good head for business. His vision was quite clear: turn the small Rose Pharmacy into something bigger. In his wildest dreams, he could not have foreseen that his modest enterprise would one day become a company that spans the globe.

It all began with natural, soothing herbal remedies. Julius Wilhelm Braun soon expanded his pharmacy by adding a new business model: a mail-order service for herbal remedies. This young father was curious, stagnation was not an option. He passed his characteristics on to his children. His eldest son, Bernhard Braun, was also fascinated and driven by innovative ideas, always on the lookout for new solutions. Headaches were a painful nuisance, and so were skinned knees. His solutions: migraine sticks, band aids, and the start of pharmaceutical production, including the "Höllenstein stick" to treat warts.

His grandson Carl Braun also had an eye for the big picture. The production of catgut was B. Braun’s first step on the road to the large scale manufacturing of medical products. Having the courage to develop medical advances that improve patients’ lives – this desire still motivates us today.

Throughout the coming generations, under the leadership of Otto Braun and his son Ludwig Georg Braun, the company continued to develop dynamically. They pursued a course of strong international expansion. The number of employees worldwide grew to more than 50,000 in a few decades. Despite this enormous growth, one maxim has not changed: we will remain an autonomous, family-run company.

Medical nutrition therapy has only been possible since the 1960s. Before, survival was impossible for patients who could not ingest nutrients in the normal manner. Amino acids, fat, carbohydrates, vitamins and trace elements – these substances are essential for human survival. But how could they be administered to people parenterally, i.e., intravenously, without passing through the digestive system first? This was insurmountable for many years, especially the delivery of fats.

Innovative scientific ideas bear fruit: In 1962, B. Braun brought Lipofundin on the market, the first infusible lipid emulsion developed in Germany. It was followed by high-concentration amino acid solutions and combined solutions for needs-based nutrition therapy. The Nutriflex multi chamber bag system – patient-friendly complete solutions in a bag – has been part of the B. Braun product range since the 1990s. B. Braun now also offers a comprehensive range of products for enteral nutrition.

A system approach integrating products and services enables us to collaborate with partners and customers to provide solutions for patients with a wide variety of clinical symptoms. B. Braun always strives to provide the best possible nutrition solution for people who are partly or wholly unable to ingest nutrients via their digestive system, in cases of critical or chronic illness.

Our present day Nutrition Theraphy
Back to Top

Purifying blood to save lives

Blood purification has always been an extremely complicated branch of medicine. After the breakthrough in clinical dialysis in the 1950s, B. Braun invested in the latest technology and started as a supplier for extracorporeal blood treatment. This filtration procedure is used to remove many toxins from the blood. At the end of the 1960s, the company began to manufacture its own dialysis machines in cooperation with FRABA.

New machine generations followed, and their use brought a constant increase in patient safety. Machines became significantly more user-friendly with the advent of digitized dialysis in the 1980s. B. Braun has been running dialysis centers since the early 1990s, the first of which was opened in Budapest, Hungary, in 1991. After the turn of the millennium, networked systems meant that a dialysis patient’s entire treatment process could now be controlled and documented. B. Braun Avitum has had global success as a full-service supplier for extracorporeal blood treatment since 2008, and now runs more than 360 renal care centers.

Our present day Extracorporeal Blood Treatment Therapy
Back to Top

Infusion solutions, rigid metal cannulas and fragile glass vials — that’s how infusion therapy started back in the 1930s. B. Braun did pioneering work in the early days of infusion solutions: Sterofundin was one of the first infusion solutions to be produced industrially. To this day, it is an indispensable part of modern medicine.

Otto Braun, who was commercial director at the time, took care to ensure the profitability of product development. Dr. Bernd Braun was a scientist and inventor who, with his engineers, conducted experiments in search of the best solution. The focus was on user safety and patient comfort. Rigid metal cannulas are uncomfortable and glass containers break easily. The high cost of containers meant that they were reused, leading to an increased risk of bacterial contamination.

B. Braun made a breakthrough in the 1950s: the development of single-use  infusion equipment made of plastic. Shortly afterwards, the brothers invented their real moneymaker: the Braunüle. Users and patients alike experienced its increased safety, and its convenient, comfortable flexibility under sterile conditions. The company led the way in pump development, as it does today. Already in 1951, B. Braun offered the predecessor of what became the Perfusor, a dosage pump for the IV drug administration.

The Infusomat, the first volumetric infusion pump, followed in 1971. To this day, B. Braun is a leader in infusion therapy. Braunüle and Perfusor have become generic terms, synonymous with the quality and safety that we continue to develop. In 2012 we introduced Introcan® Safety 3, featuring an integrated, self-sealing valve that prevents blood leakage and protects against infection.

Our present day Infusion Therapy
Back to Top

With sensitivity and precision

Manual dexterity, an eye for details and the right “tools” are indispensable for surgeons. Gottfried Jetter started manufacturing surgical instruments in Tuttlingen in 1867. What began as a small workshop expanded rapidly after his brothers-in-law Karl-Christian und Wilhelm Scheerer joined him, and they quickly became famous, thanks to outstanding quality and precision craftsmanship. Their vision is what led to success. Scalpels, scissors, tweezers, needles, forceps – the company, which later changed its name to Aesculap, has always specialized in the production of instruments for diagnostics, dentistry, veterinary medicine and, of course, surgery.

Only a few years later, Jetter’s company already offered a comprehensive  product line. More innovations came in the decades that followed; in the field of abdominal surgery, for example, the first forceps-shaped suturing machine with metal clips to allow reliable stapling in the gastro-intestinal tract was introduced in 1922. Products for cardiothoracic and vascular surgery were added to the portfolio. Innovative motors for bone surgery were also developed: the first surgical electric motor appeared in 1935, followed by the first pneumatic motor in 1967.

The second half of the 20th century Aesculap branched out to become a specialist supplier of orthopedic implants such as hip and knee joints. Pioneering research in spinal surgery and neurosurgery grew in importance; in fact, B. Braun’s pioneering spirit and quest for perfection are still the driving force behind our efforts to support surgery today. Solutions made with high technological manufacturing standards help to improve people’s health: outstanding precision for minimally invasive procedures or the accurate fitting of artificial knee or hip joints, for example. B. Braun provides a wide and diverse range of services and solutions to cover every aspect of surgical and operative processes in clinics, laboratories or operating room.

The way forward can frequently be found by going back and retracing paths already trod, and by recognising that the successes and failures of past eras can serve as lessons for the future.
Journey to the past with Aesculap
Back to Top

A revolutionary idea for wound therapy

Open, operate, close, remove stitches: everyone is familiar with the wound closure procedure. Wound treatment is a field of therapy with a long tradition at B. Braun. Guaranteeing the sterility of sutures posed a big problem until the beginning of the 20th century, because sutures only close the wound. It is just as important to ensure that no infections endanger the healing process that follows.

Carl Braun, Julius Wilhelm Braun’s grandson, traveled to foreign countries and met interesting people. One of them was Dr. Franz Kuhn, a surgeon from Kassel who was frustrated by the problem of wounds getting infected after closing. There must be a solution, he thought. He told Carl Braun about his idea for sterile, absorbable suture material. Commonplace  today, a revolutionary idea back then. In 1908 came the sensational news from B. Braun: for the first time ever, sterile suture material can be produced and sold. What’s more, the material is fully absorbable, which means it dissolves when the wound is almost healed.

This was only one milestone in the history of wound care therapy. There were more to follow: in 1935, the non-absorbable synthetic suture material Synthofil A was launched successfully. Some further examples of modern wound management are Supramid, a nylon-based suture material; Histoacryl, a tissue adhesive for the closure of skin wounds; and Monosyn, a synthetic absorbable suture material made of glyconate. New, revolutionary procedures are still being developed to this day through the exchange of ideas between scientific research and clinical practice.