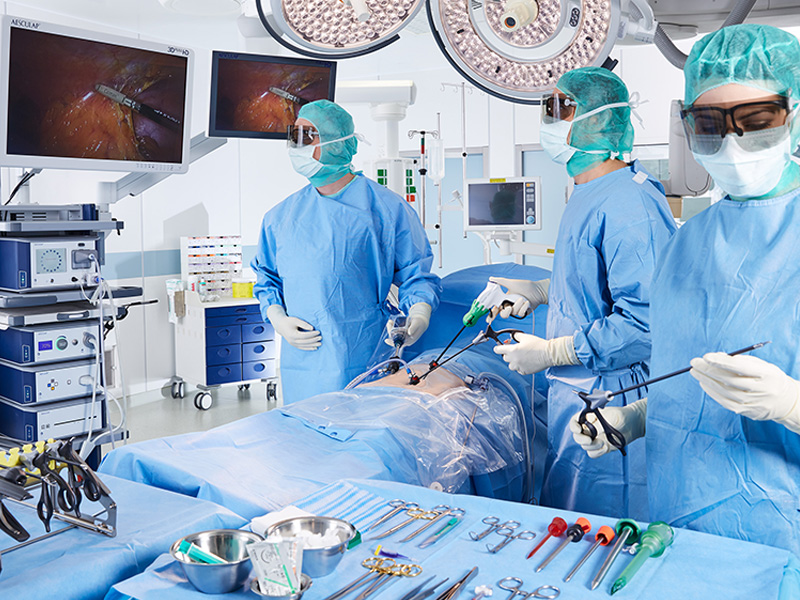 3D stands for three dimensional and is a synonym for stereoscopic viewing. One of the advantages of having two eyes is the capacity of depth perception. Because our eyes are separated from each other by about 3 inches each eye sees a slightly different image when watching an object. When the individual images being viewed by each eye reaches the visual cortex, the brain automatically puts these images together and interprets information regarding the third dimension. Other cues that help the brain to process depth perception are perspective, shadowing, lightning, color, relative size etc.

The Aesculap EinsteinVision® 3.0 camera system uses those characteristics of human perception to create a 3D image. During surgery two Full HD sensors in the camera head capture two images from a different viewpoint, simulating the different perspectives of the left and right eye. These images are processed and displayed onto a 3D monitor screen, which delivers crisp and bright 3D visuals. The viewer needs to wear 3D glasses to create the illusion of spatial depth. These signals need to reach the brain simultaneously yet by separate channels which is made possible by using 3D glasses.

What's the difference between active and passive 3D glasses?

3D glasses can be divided into two primary technologies, active (shutter) and passive (polarized) glasses. Both techniques are different methods for sending two stereoscopic half-images for each eye separately to the brain.

Active shutter 3D glasses electronically open and close liquid crystal lenses over each eye, synchronized with the 3D medical monitor. When the monitor delivers a left eye image, the 3D glasses cover the right eye so only the left eye sees the image on the monitor, and vice versa for the other eye. The process is repeated so fast that it is virtually undetectable to the viewer. The disadvantage of active 3D glasses is that they are battery powered to drive the shutter function and communicate and sync with the 3D monitor. Imagine what could happen if the shutter glasses run out of battery mid-way through surgery. Apart from the additional weight of the batteries the shutter glasses are also more expensive than their passive counterparts.

Passive polarized 3D glasses have a different filtering system for ach eye which means that each eye only sees the image intended for it. They see the left and right image at the same time (unlike shutter glasses) onto the same area through polarized filters which are oriented at right angles to each other. These polarizing filters allow light of different polarizations through. Each eye perceives a different image which results in the 3D effect.

Actually 3D passive glasses need to be circularly polarized because only then the viewer can tilt the head from side to side without affecting the contrast and brightness of the 3D image.

Because polarized 3D glasses don’t need batteries to create the illusion of a 3D image and it is no (viewing) problem to switch between 2D and 3D live image on the monitor screen they are nowadays the preferred technology of choice when it comes to medical 3D viewing.

Which sterility process is the best for 3D visual components?

Until recently there were two options available for the sterile product supply of a camera system. The first option is autoclaving. This usually includes the endoscope and sometimes also the camera head if it is not draped with a sterile cover. The disadvantage of autoclaving is the thermal stress on the product due to high temperature (134°C). This often results in a shorter product lifetime and increased investment cost as additional camera heads need to be bought in a defined time period. Another disadvantage is that due to the required autoclaving process time a hospital usually requires multiple camera heads to run the daily OR routine. This increases the investment costs considerably. The advantage is that autoclaving is a standard process which is available in virtually every hospital.

The second option is Sterrad, a low temperature gas plasma sterilizer requiring hydrogen peroxide for the sterilization process. There are various types of Sterrad sterilizers available. The benefit is that the total sterilization cycle including transport is usually considerably shorter compared to autoclaving as the Sterrad sterilizers don’t need to be placed in the CSSD but can be located closer to the OR. This reduces the investment cost as it may not be necessary to buy multiple camera heads. The disadvantage could be that the type of Sterrad sterilizer required to process 3D components are not available in the hospital.

Because of these existing drawbacks Aesculap introduced an innovative sterile concept – the EinsteinVision® sterile single camera drape which hermetically seals the complete 3D endoscope, the camera head and its cable. It is used as a sterile barrier between patient and camera system. The concept is simple: one patient, one drape!

Chip-on-the-tip 3D camera systems – 3D chip-on-the-tip endoscope is, compared to the traditional camera set-up, a relatively new technology. Two image sensors are directly fitted within the distal tip of the endoscope. The image generated in the distal objective lens is guided onto the two image sensors and converts the optical signals into electrical signals and transmits them to the 3D camera head via cables. From there the stereoscopic signals are transferred to the camera control unit and further on to the 3D monitor where they are displayed as passive stereo type with different polarizing angles in the left and right. The passive 3D glasses enable the viewer to get the impression of a three dimensional image.

Optical components and interfaces in the endoscope are replaced by signal cables. This reduces the overall weight of the camera system.

Due to the given 10mm outer diameter of the 3D camera system and the fact that two sensors need to be fitted into the distal tip of the endoscope the size of the image sensors is considerably smaller compared to a conventional 3D camera head. Therefore the native image resolution of the sensor is usually lower than Full HD (1080 lines of horizontal resolution) and needs to be upscaled to Full HD quality.

Depth perception is a key feature for stereoscopic viewing. Only a good depth perception provides the impression of a natural 3D image. Chip-on-the-tip camera system by its technological nature only provide a limited depth of field which usually results in a less impressive 3D impression.

Smaller sensors have a reduced pixel size which usually results in a higher level of disturbing image noise. Therefore it is beneficial to have bigger sensors in the camera.

Conventional 3D camera ystems – A “conventional” system like the Aesculap EinsteinVision® 3D camera system consists of a rigid stereo endoscope containing glass rod lenses and objectives to transport the image from the distal tip of the endoscope to the two image sensors which are located in the camera head.

From here the flow of 3D information is similar as described in the chip-in-the-tip camera.

The main differences to chip-on-the-tip system are:

Wouldn't it be nice to watch 3D content without the need to wear 3D glasses?

Ultimately this is what many believe will be the next step in 3D technology. Therefore a lot of development is going on to bring so-called autostereoscopic displays to the market. These 3D displays can already be seen in some smart phone devices or commercial display systems and experts assume that this technology will soon find its way into the medical field.

3D technology in laparoscopy – a new dimension in the operating room

Laparoscopy has revolutionized surgery compared to open procedures, especially in terms of reducing complications. Laparoscopy can be further improved through innovative technology. One such approach is 3D laparoscopy.

3D versus 2D laparoscopy: The verdict is clear

When new medical or technical innovations find their way into general practice, initially there is often not a clear consensus regarding their advantages. The comparison between 3D and 2D laparoscopy, however, has yielded a clear judgment in favor of the 3D technology.