How to take care of your colostomy

If you have undergone a colostomy surgery, you will need to use a stoma bag. In time, you may be able to use and change your bag on your own, allowing you to be independent. At the same time, you may have some questions about the way to manage your colostomy properly. You will find some answers here on this page. This will probably help you and your family to cope with your new situation. 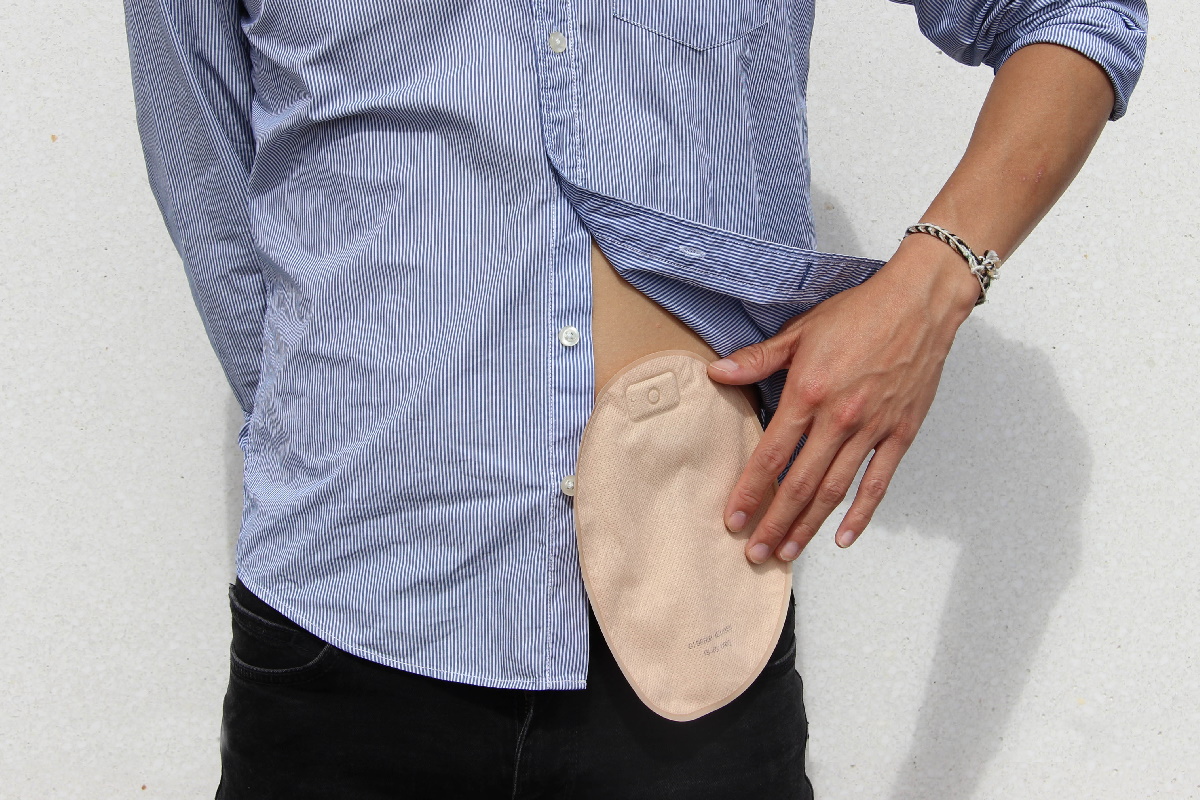 Answers to the most frequently asked questions

In addition to the FAQ below, you can also check for further topics concerning people with stoma in general, independant of their stoma type. Don't hesitate to contact your ET nurse for further explanation or tips to manage your colostomy or ileostomy properly.

FAQ even before undergoing surgery

FAQ even before undergoing surgery

You've learned that you will get a stoma and with this a lot of questions arise.

FAQ by ostomates in general after surgery

FAQ by ostomates in general after surgery

In addition, you can also check for further topics concerning ostomates in general after surgery.

Both are possible, either way it is not serious. It´s normal that the mucous nippel goes a little in and out due to peristaltic movement of the bowel.

A stoma that goes in permanently is said to be invaginated. The immediate consequence may be the adjustment of your appliance to avoid any risk of leakages, and therefore skin irritation.

A stoma that goes out abnormally is a complication that can reach the stage of prolapse. This may require surgery to reattach the intestine. Prior to that, it is essential to adjust your appliance.
In any event contact an E.T. nurse.

Yes! Shape changing is a normal evolution. Indeed at first your stoma will appear to look swollen and can become larger a few days after the operation. At the beginning measure your stoma (at skin level where the bowel is coming out) at least once a week as your stoma will normally get smaller with time. A change in shape might mean a change in the appliance you need to use. An E.T nurse will check its size and will adjust the order if necessary.

Yes, this results in a colic and a stop of the emission of stool and gas. The obstruction can be due to food debris : instillation of warm salt solution can address this problem.

However if the obstruction is due to a stenosis then the stoma will be pale and edematous. You are then advised to contact your doctor or E.T. nurse without further delay.

During chemotherapy, changes are to be expected. Your stoma can become more sensitive and edematous, the slightest friction can cause some blood to drip. Although this is not alarming you should be even more careful and gentle. Also, stools may become more liquid and aggressive for the peristomal skin. Make sure to correctly cut out your skin protector.

Sometimes, in case of more liquid stool, it can be necessary to use paste e.g. Superfiller, stoma rings or convex bag systems to help prevent that stool can go under the skin protector. It is also advisable to use a drainable bag during the treatment if the stools are liquid in order to avoid too frequent changes. It is necessary to adapt your diet accordingly.

Yes! In the first month after your operation your appetite may be quite poor. Your taste buds may also make food taste strange. As a result, some people cannot eat or drink what they have always enjoyed. If you are feeling this way, drink more water, eat smaller meals more often.

With a stoma, good nutrition becomes more essential than ever because your bowel has less capacity to absorb food as well as it did before part of it was removed.

Read more about 'An adapted ostomy diet can change your life'

No need to follow a special diet, the important thing is to eat healthy meals. However, it is important to remember that every individual is different and their eating habits may vary. Here are a few easy guidelines in order to have a daily well-balanced diet.

Do you want more tips?

We have teamed up with a specialist in nutrition who gives advice on how a balanced diet can change your life as ostomate.


Read more about 'An adapted ostomy diet can change your life'

Yes! Due to your surgery you have to drink more water since your colon is not absorbing as much water as it should. To compensate for this loss, you should drink on average at least 1.5 liters of water per day. The amount of water you will have to drink will depend on the type of stoma you have (between 1.5 to 2L per day).

If you experience diarrhea:

If you experience constipation:

Do NOT take any laxatives without asking your doctor or E.T. nurse.

If you feel bloated:

If either of these symptoms persist, it is important to contact your doctor or an E.T. nurse who may prescribes you the apporiate medication.

More tips on a healty diet?

We have teamed up with a specialist in nutrition who gives advice on how a balanced diet can change your life as ostomate. Learn more here.

Read more about 'An adapted ostomy diet can change your life'

It is a common worry amongst people living with a stoma. Don’t worry most colostomy and ileostomy bags have a filter allowing gases to escape automatically, without odors. It is effective on the whole for at least 12 hours. However, it may happen that the filter becomes saturated or moistened by liquids. The bag then remains inflated by the gas. This occurs most often after 12 to 24 hours of wearing the bag or at the end of the night. Never make a hole into your stoma bag as, at that time, odors escape.

Remember that it is important to close your filter during water immersion (showering, bathing, water sports...), by applying an adhesive patch on the filter. These patches are supplied in the stoma bags’ boxes. Remember also to remove the patch at the end of the immersion for the filter to start functioning again automatically. See tips how to cover the bag filter here.

For your comfort, you can decrease the amount of gas produced daily by following a few simple guidelines:

You may at first imagine that you can smell the stoma but no worries this passes with time as you will get used to having a stoma. If there is a smell from the bag, change it and discuss with an E.T. nurse.

Phantom rectum is similar to “phantom limb” experienced by amputees, where they feel like the amputated limb is still present. If you feel movement in the way you did prior to surgery, that is normal. This may even occur for years post-surgery. If the rectum was not removed, you may experience this sensation and may also pass mucus when you’re on the toilet. Some people who had their rectum removed have reported that the feeling is greatly alleviated by just sitting on the toilet and acting as though a bowel movement is taking place.

Be aware that tablets or capsules may come out whole in in the bag. In most cases, this means you did not get the medicine. If you noticed this, talk with your health care provider or pharmacist. There may be other medicines you can use to make sure you are getting what you need. Liquid or liquid gel medicines tend to absorb faster and may work better for you.

The right solution designed for your colostomy

If you have a colostomy you will need to use a stoma bag. After surgery you will be given a transparent bag or a stoma bag with an inspection window in order to help you to learn how to position your bag correctly. Then you will discover (an E.T nurse or a specialized nurse will show you) that there are different types of appliances to choose from. Finding what will suit you the most will depend on the type of colostomy you have and with what you feel the most comfortable.

Depending on the stoma position the stool consistency vary from liquid or semi-liquid stool to formed stool, which consequently affects your choice of ostomy bag. With a colostomy you will, in most cases, use a closed bag but you can also use a drainable bag if it suits you better.

Questions how to choose your appliance?

Questions how to choose your appliance?

Do you have doubts whether to choose a one- or two-piece system, if cut-to-fit or pre-cut versions or which color to choose, please refer here.

Do you prefer bags with bottom outlet?

Do you prefer bags with bottom outlet?

If you have pasty or liquid stools, you may prefer drainable bags with bottom outlet as used also by ileostomates.
Back to Top

Our offer of closed stoma bags

In the case of a one-piece system, the wafer and the stoma bag are bounded together and must be changed together. 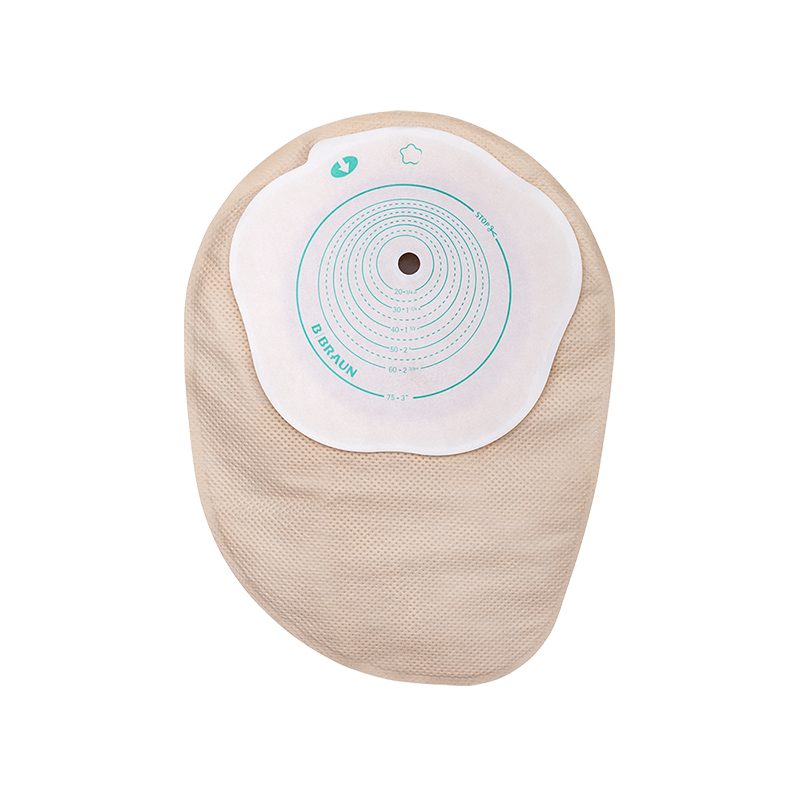 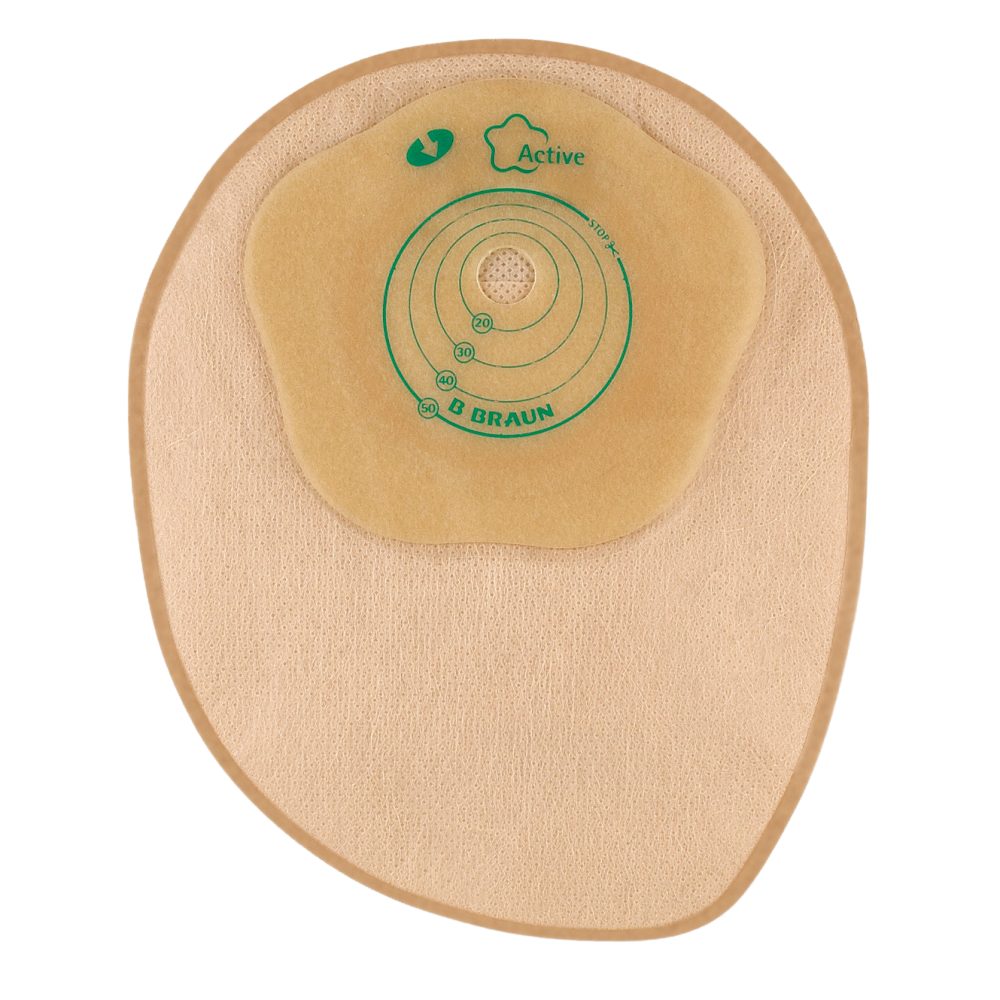 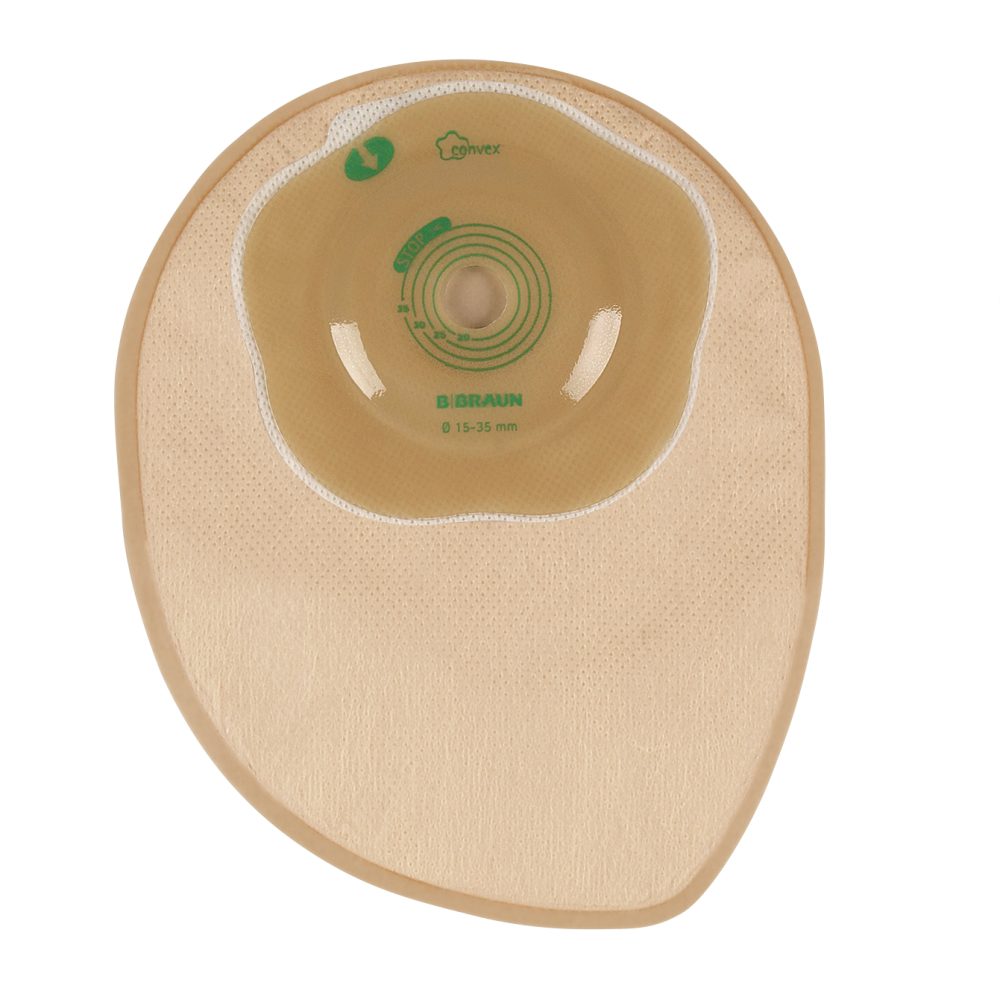 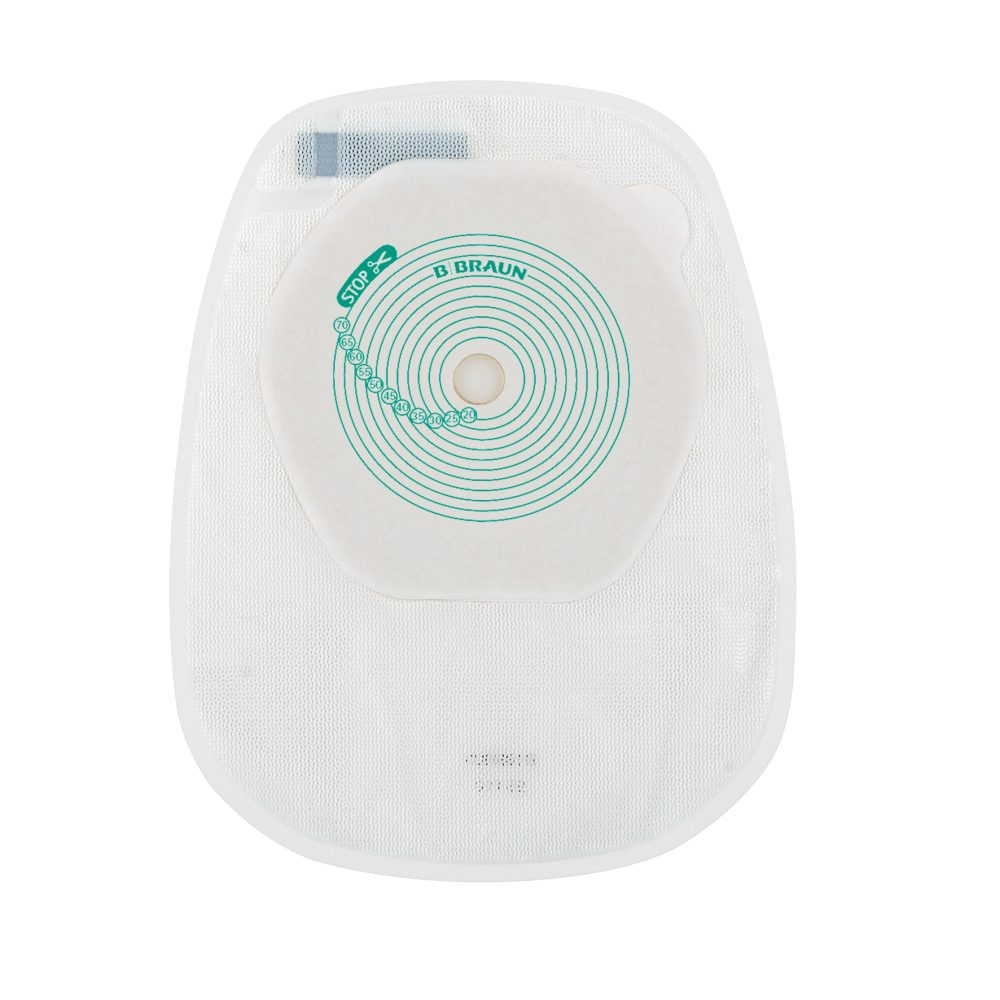 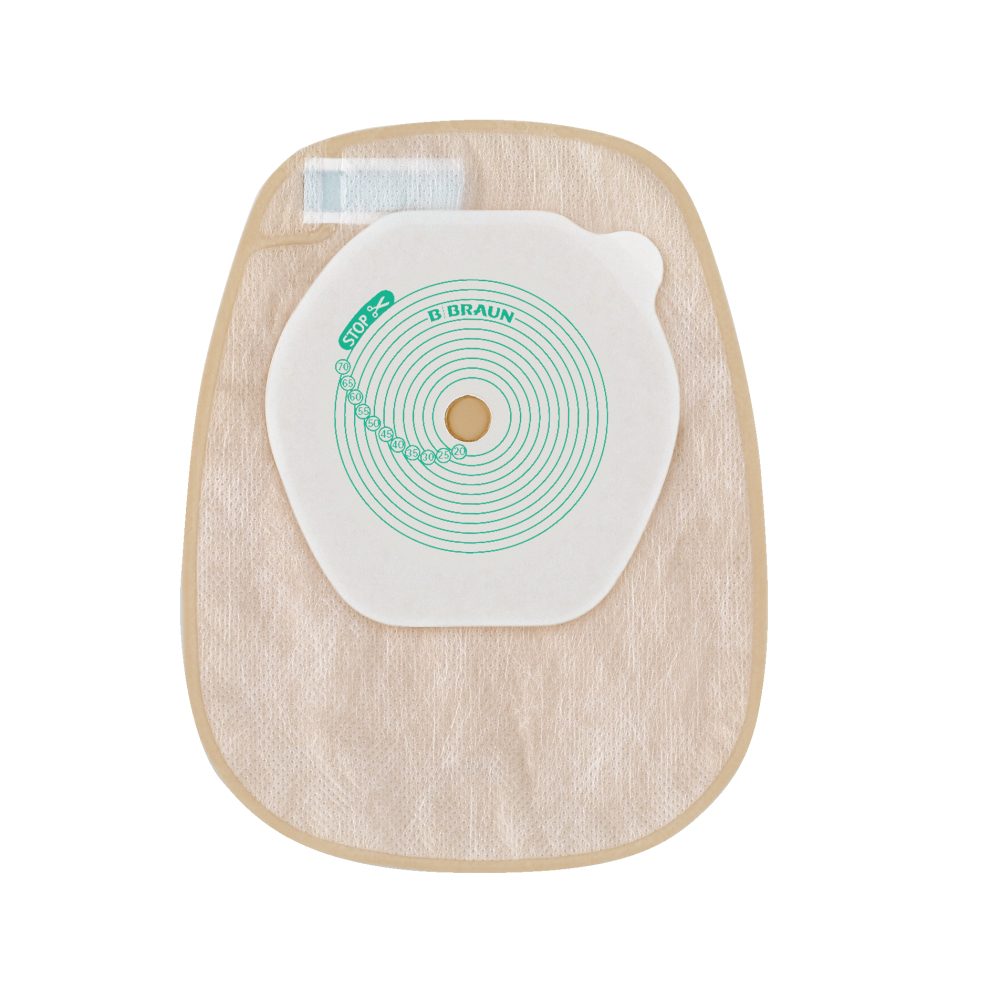 In the case of a two-piece system, the wafer and the bag are separated, before being attached together through a coupling system. The bag can be changed while the baseplate may remain in place for several days. 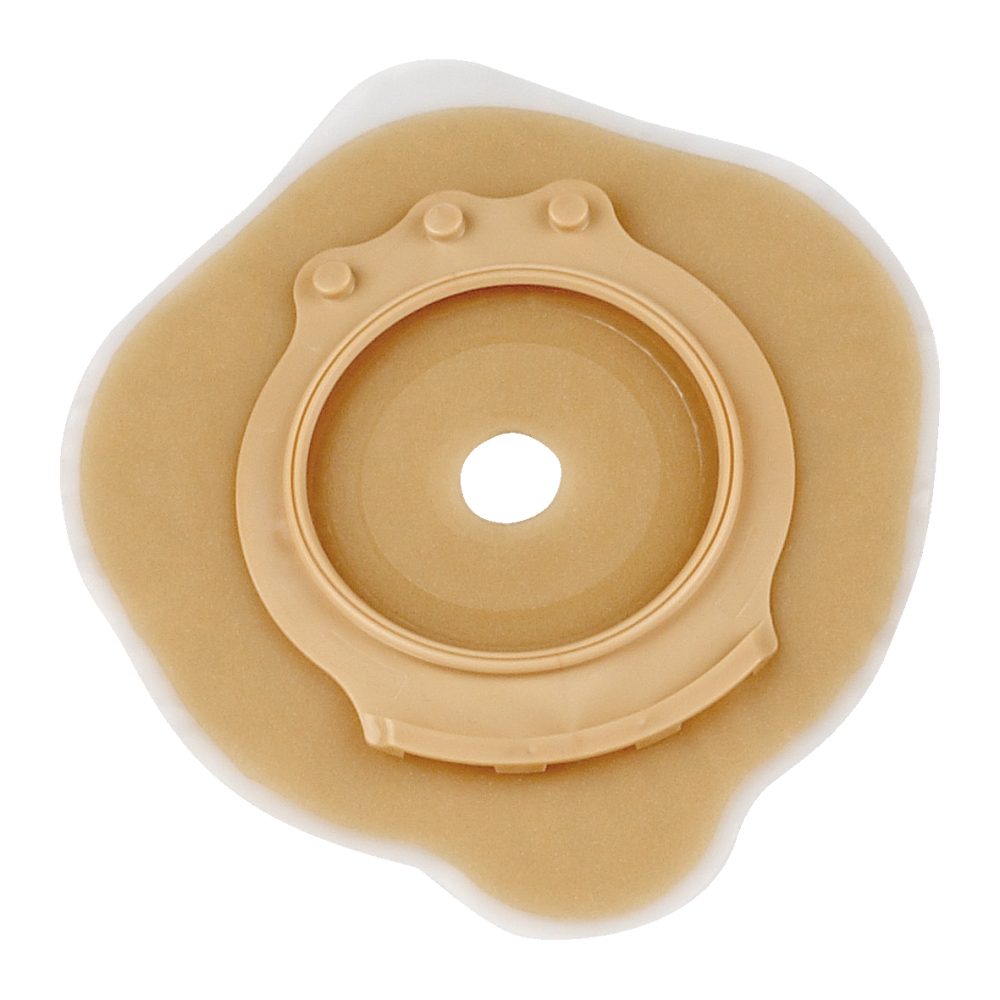 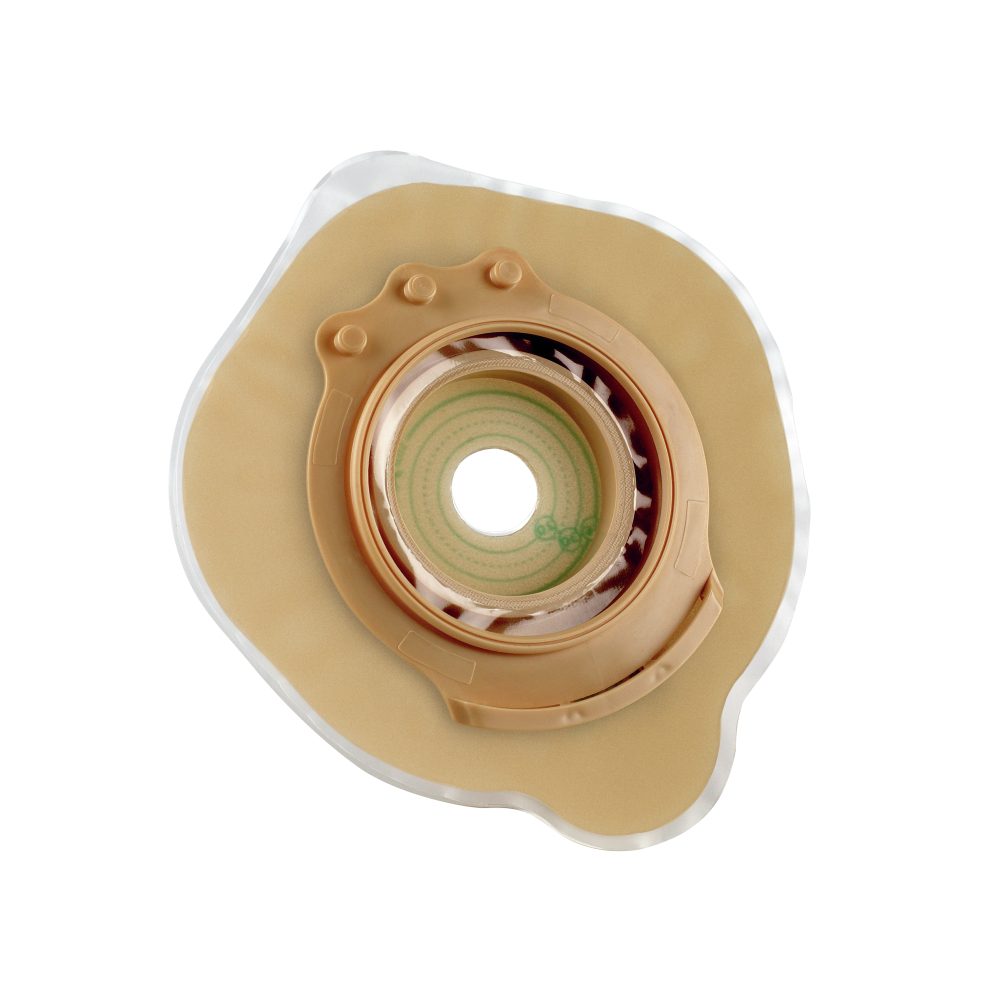 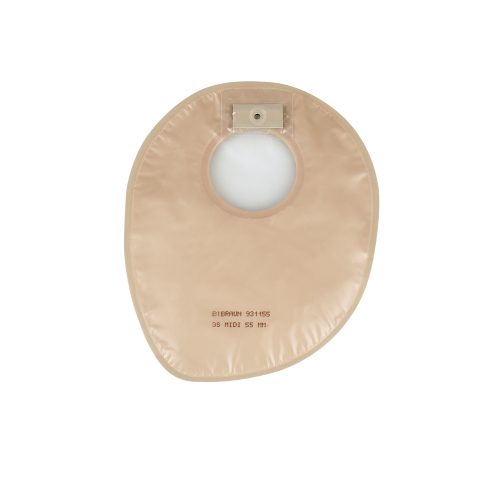 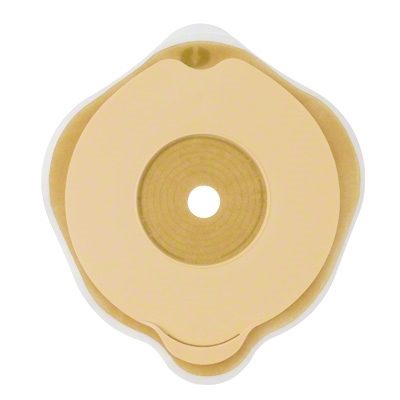 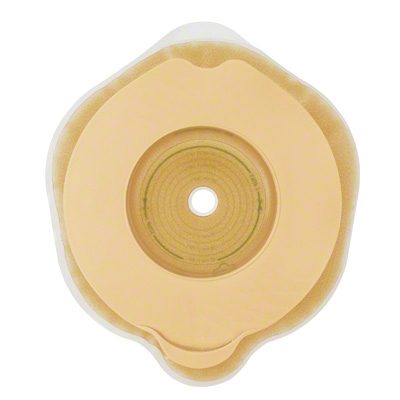 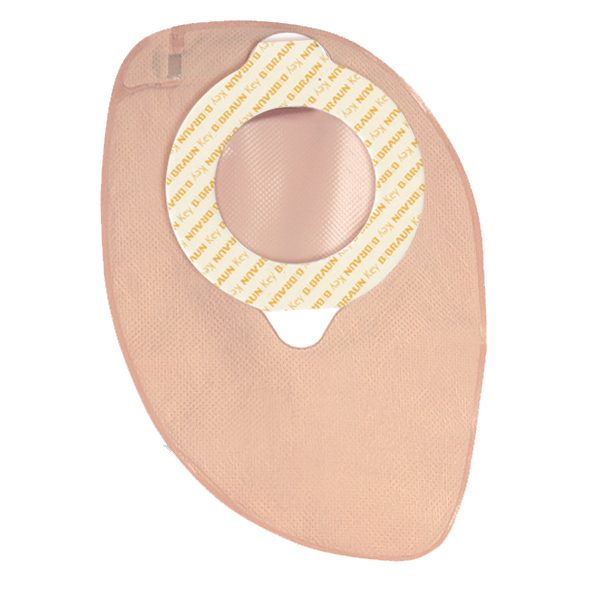 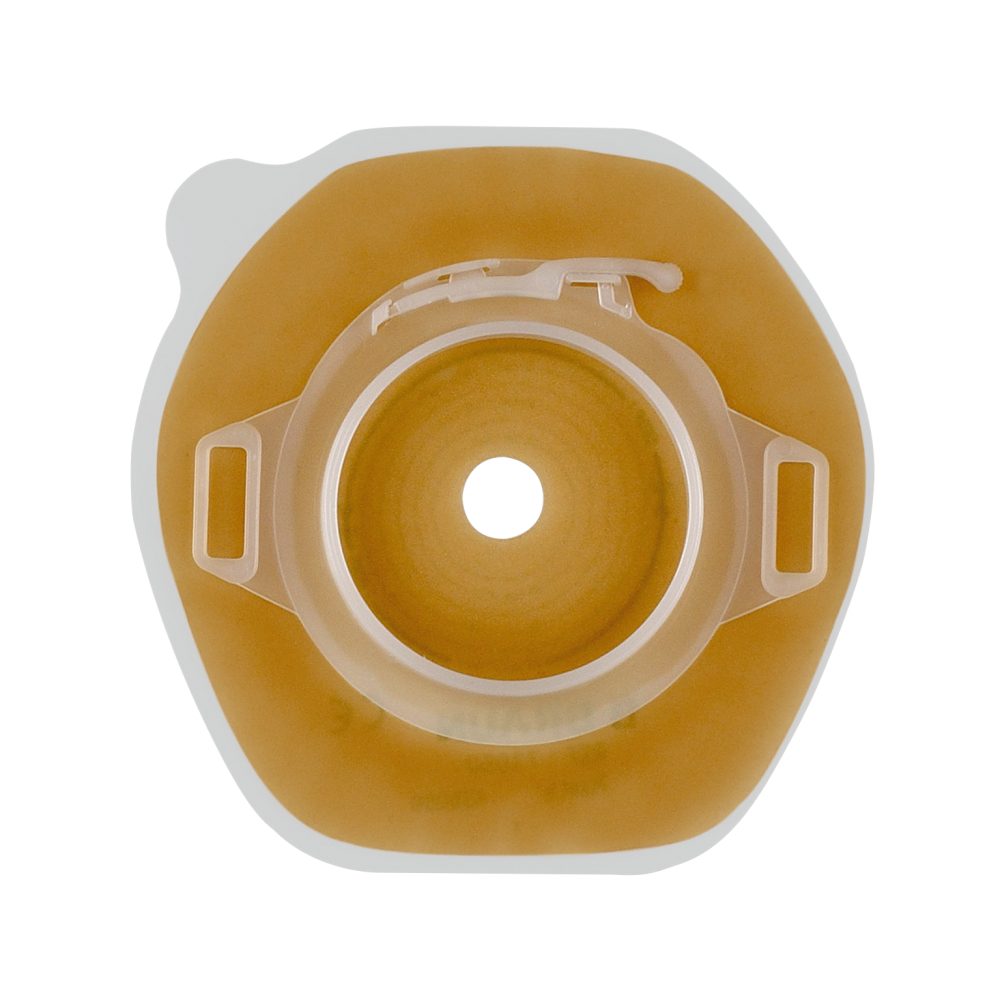 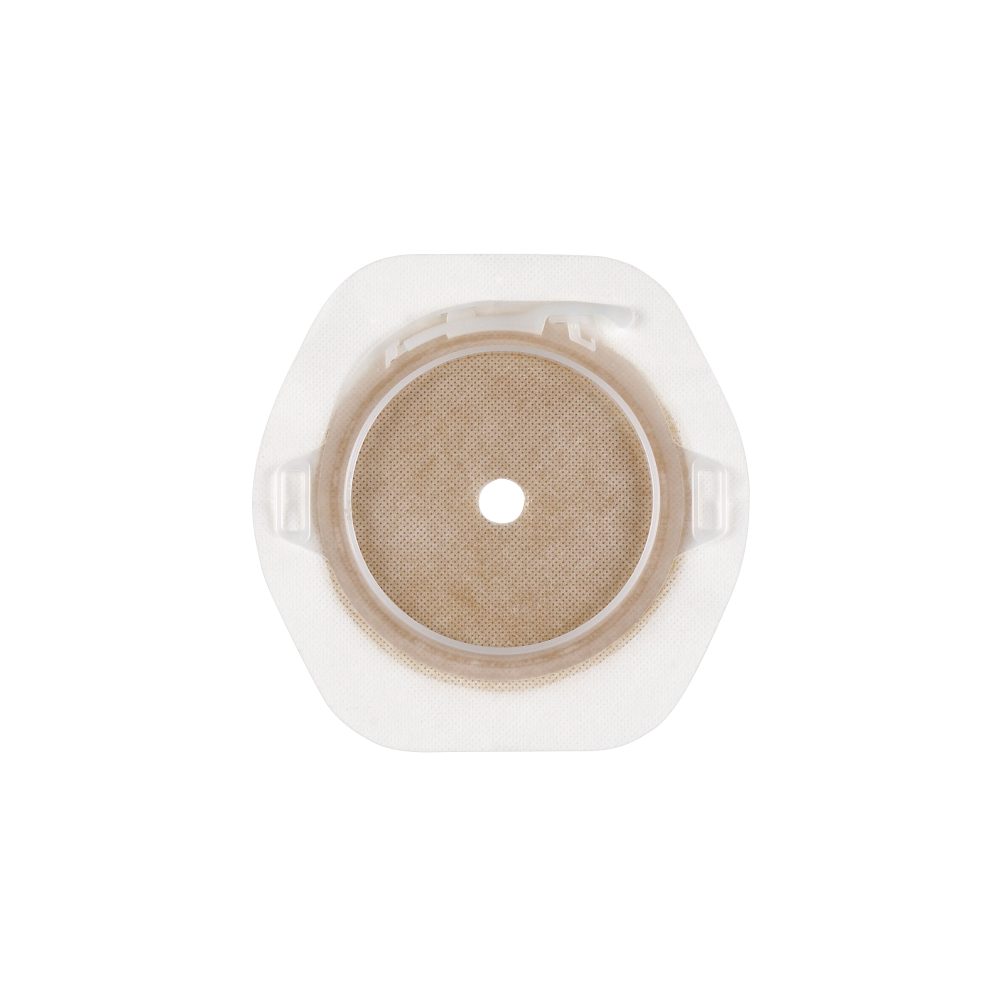 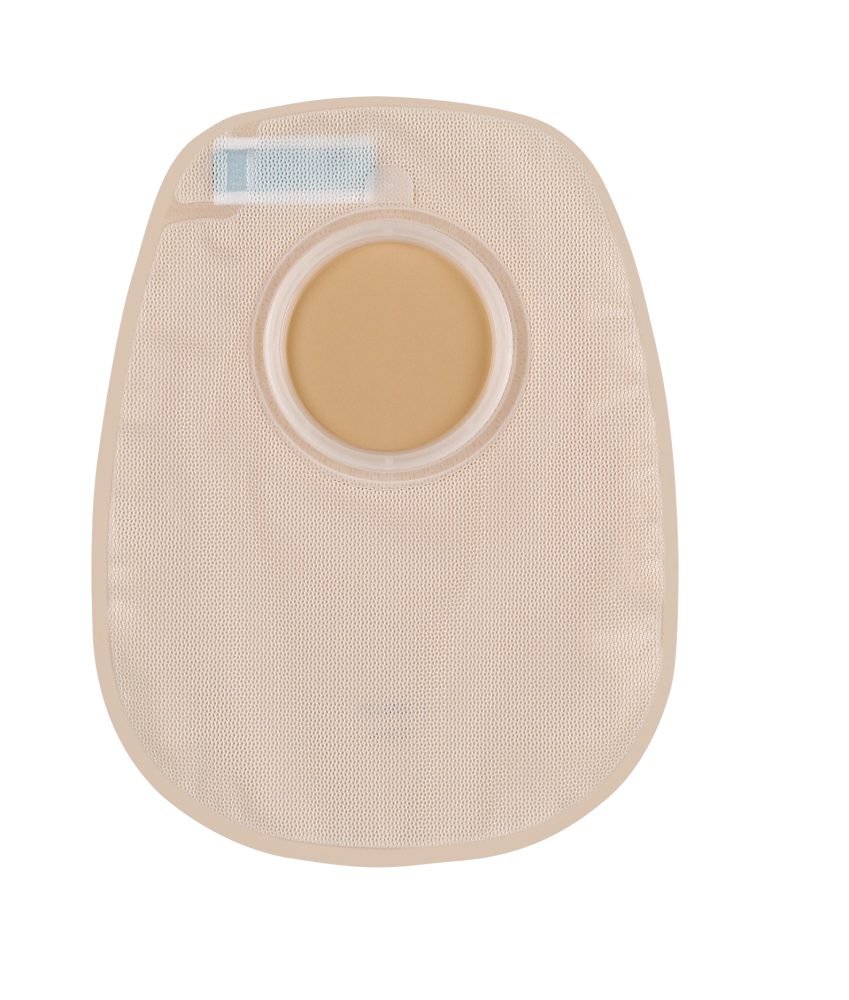 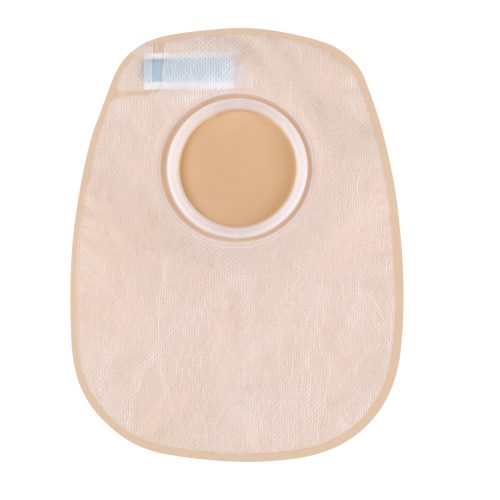 Your partner in ostomy care

Are you caregiver or healthcare professional?

There is more specific information for you on our dedicated webpages.
Visit our section for healthcare professionals